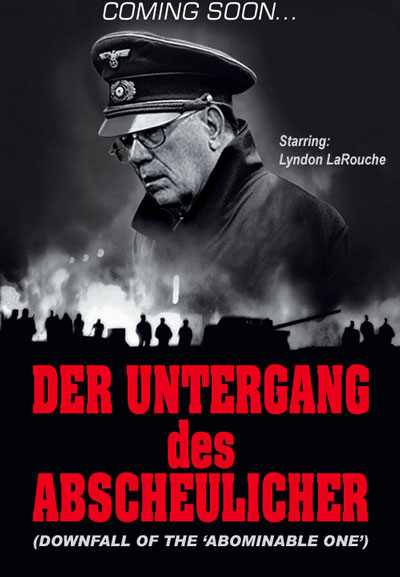 
Today, the JDO blasted Ed Asner, the second time it has done so. First, it disrupted a meeting to help the Arab Jew-killers of the PLO in Los Angeles several years ago. Now, JDO has found out that "Ed Asinine," a self-hating Jew who spent most of his life involved with hard-core communist groups that are viciously anti-Israel has actually pledged support to long-time Nazi Lyndon LaRouche. Asner recently gave political contributions to, and attended and spoke at meetings of, "Hitler wannabe" LaRouche, whose group has been termed a gang of "Nazis without swastikas" by experts. Asner heartily praised Nazi LaRouche and his Jew-hating group even though he knew LaRouche has not only denied the Holocaust but has even suggested (G-D forbid) making one in the future. JDO calls on Jews to spread the word about "traitor to the Jews" Asner and get the word out in Hollywood and everywhere--no one should have anything to do with Nazi helper Ed Asinine.

Journalist Carl Koslowski has described his encounter with Asner at a 2004 LaRouche presidential campaign rally in California:

Things were fairly routine until Hollywood liberal legend Ed Asner walked into the room and sat down in front of me. It was my turn to pounce, and Ed's turn to look stunned.

"I just [came] because I had heard contradicting rumors of him and had dismissed him because of it, but I found him very enjoyable," said Asner. "Everything I've heard from him is in the progressive agenda that I entertain.

"All too often Democrats play go-along to get-along, and LaRouche shows that it's more than the head of the pimple that's gotta be squeezed," Asner continued. "I support Kucinich really, and I can't make a judgment on the time LaRouche spent [in jail] because he will not be the first person to be placed there and silenced that way in America. I am certainly aware that he is controversial, but in this case, that attracts me because I tend to be seen as controversial in the same way."

In the following newspaper letter, a LaRouchoid at Middlebury College used Asner as an example to prove that LaRouche actually loves Jews:

When I invoked the memory of Middlebury College's great moral legacy as being the first institution of its kind to call for the abolition of slavery, a standard to be upheld and defended, in introducing Democratic Presidential Candidate Lyndon H. LaRouche Jr. to the campus, I was stating to some people's astonishment that LaRouche best exemplifies this tradition.

It is not Mr. LaRouche's presence on campus, what he said, or has said that in any way has compromised Middlebury, but rather a rotten attitude fostered and living within Middlebury today that compromises not only its higher ideals, but the cause of providing an education dedicated to truth.

Mr. LaRouche's mission is, in the tradition of Socrates and Plato, to expose those pretensions to knowledge that fill the marketplace of education, politics and government. It is apparent that Mr. LaRouche is a real threat to people at Middlebury. Though the Middlebury College Democrats are to be commended for doing what the Un-democratic Party is afraid to do it is quite obvious that they were under enormous pressure to make sure LaRouche and his followers had as little impact upon the student and faculty body as possible.

I find it appalling that members of the Middlebury College community could make statements that LaRouche is a racist, xenophobe and conspiracy theorist and that his followers are cultists. These comments betray free speech and really try to speak from both sides of the mouth. It is sad see such genuinely hypocritical behavior sanctioned at Middlebury. The defamations against LaRouche and his supporters, including myself, are ill-mannered, patently wrong and dishonest.

To those who have made such statements or think is this way, I dare you call the heroine of the Civil Rights movement and great supporter of LaRouche, Amelia Boyton Robinson, a racist. Is former Attorney General Ramsey Clark and those Federal Judges Keeton, Botstetter and Crane merely conspiracy theorists in testifying that LaRouche and associates were railroaded to jail? How about actor Ed Asner honoring the work of Mr. LaRouche - is Asner a racist too? Would you call Mr. LaRouche's many Jewish close confidants anti-Semitic for their association with LaRouche?

It is ironic that the one person who has proven the Mosaic notion that "man is made in the image of God" to be verifiably true - the same self-evident truth "that all men are created equal" which the founding fathers of this nation invoked and fought for - should be so categorically trashed and attacked.

My suggestion is that it is time to go to school, study Plato, Cusa and Liebniz or join the army in Iraq if you hate LaRouche and his call for a just economic system and peace. I think the answer is that the College Democrats were under enormous pressure to limit Mr. LaRouche's influence, by blindly repeating old slanders, to look to the powers that be at Middlebury and the Democratic Party.

Middlebury College has a vested interest in unquestioned support of one if its most important benefactors, Felix Rohatyn. Since the 1970's LaRouche has been a big critic of Wall Street and Rohatyn's austere measures forced upon New York City that ignored the "General Welfare."

I will omit the writer's name since when you've seen one LaRouche zombie, you've seen them all. Asner is a Jew who would tell other Jews that the gas chambers are merely showers. He is doing the work of LaRouche to destroy his own people and is a truly sick man.