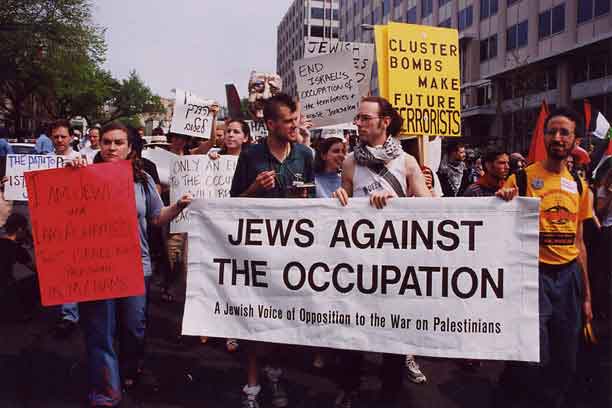 The anti-Israel group "Jews Against the Occupation" which openly goes to Arab sponsored "Death to Israel" rallies and carries placards "Cut Off All Aid to Israel!" WAS planning a meeting at the offices of a liberal Jewish group "Workmens Circle" on August 28, however, thanks to efforts of concerned Jews, the meeting has been cancelled. Now they will have to hold it at the Communist meeting hall known as the Brecht Forum, and their true nature will be exposed. They can sing the INTERNATIONAL instead of HATIKVA and the Death to Israel song Biladi, an Arab terror song. JATO is nothing less than an organization of "Adam Shapiro" imitators all of whom are helping Arab terrorist groups in their plots to try and destroy Israel. To allow "Jews Against Occupation" to rent a room was really like sending a message that Workmens Circle supports this self-hating lunacy even if it does not. It gives aid and comfort and real credibility to a group like JATO that only seeks Israel's destruction. We are renaming this group "Jews Against Israels Existence" because that really sums up their mission and goal, something JDO is working day and night to frustrate. Help us. contact JDO'S Mobilization for Israel's Survival today. You can rally against vicious anti-Israel groups take them on in the streets at rallies and protests ! E MAIL US YOUR NAME ADDRESS AND PHONE NUMBER. Send all information to mailto:judeam@jdo.org

TO THE ENEMIES OF ZION - ROUND TWO*

To all those self-destructive Jews that have made a fetish of marching with Arab terrorist groups like Al-Awda, the PLO, Hamas, chanting loudly for all your "friends" to hear "cut off aid to Israel," and other insanities we dedicate this article, and a free ticket to the insane asylum. To all those self-hating Jews who have marched under the banners of "Jews Against the Occupation, Jews for Palestine, International Solidarity Movement", all better to be named "Jews for Israel's Destruction" you had better read some history, Jewish History that is. Each and every one of you had better learn first that G-D indeed gave every inch of Israel to the Jewish People. He bequeathed it to Abraham,Isaac and Jacob our no your forefathers. For many years Jews collectively as a people inhabited this land, built their Holy Temple on it, and were driven out by the Roman oppressors. During the 2 thousand years of dispersion even when your grandparents worked in a tailor shop in Poland every proud Jew prayed and hoped for the return to Erets Israel.

When the birth of modern day Zionism came along we were restored to a land Eretz Israel, the Land of Israel. Jews saved up for years just enough just to get a boat ticket to reclaim our land. Of course in modern times your predecessors the anti-Zionists, groups like the Bund, a Socialist group, and communists who were Jewish made a loud cry against the dream of Jews returning to their land. When our leader the Honorable Zev Jabotinsky went to the Jews in Europe to flee to pre-state Israel in the1920's and 30's as Hitler was rising to power your predecessors put out lying propaganda saying that Israel ("Palestine") belonged to the Arabs even as Arab extremists following Arafat's uncle the Mufti led riots and terror against the Jews in pre-state Israel. Your predecessors revolutionaries with names like Trotsky, Kautsky,and a slew of other told the Jews to stay put in Poland, and that Polish Jews would do better making a "workers alliance" with non-Jewish Polish peasants. The smart Jews listened to Jabotinsky, the Zionist and fled. The foolish Jews, the first set of "Enemies of Zion" out of consideration for the feelings of the Arab rioters feelings stayed put and got buried with the ashes of Auschwitz.

The lesson is that huge numbers of Jews in Poland were under the spell of your heroes the Bund, the revolutionaries, the Marxists and assorted Enemies of Zion. Now, as Jews in Israel are under threat of Jew-Hating Arab Nazis with names like PLO, Hamas all of which make no bones of their hatred of Jews as Jews. Hamas makes it clear that Jews are a "race of monkeys and pigs" that must be exterminated (G-D Forbid). The PLO has openly made alliances with Neo-Nazis from a Hoffman Group led by Michael Kuehnen. In Cyprus a PLO assassination team had a white European Neo-Nazi skinhead as part of Force 17 a few years ago.

At PLO rallies in Judaea and Samaria as the Jew-Hatred Israel hatred from their official Moslem Sheik sounds literally like Goebbels. So the first question is why are PLO and Hamas doing this and worse? The answer is simple, since they would like to slaughter every Jew in Israel, they will do exactly what their hero the Mufti did and make an alliance with Nazis to fight the Jews. The second question is how could Jews like yourselves join with Islamic Nazis bent on the destruction of your own people, your fellow Jews?

The answer is a sad but simple one. In and throughout Jewish History even as Jews were clearly the victims, clearly the oppressed, there was always a small clique of Jewish traitors that helped turn in their fellow Jews to be murdered. During the Spanish inquisition there were Jewish informers who turned in Jews that were secretly living by the Torah (Marranos) to the guillotines of the Catholic Church. Those Jewish informers were mostly Jews who had converted to Catholicism, believed in it and hated their own fellow Jews. In Mediaeval Germany there was a Jewish traitor named Pfefferkorn who, like yourselves, was filled with self-hatred for being a Jew and helped write Anti-Semitic screeds used by the Church to whip up Pogroms. Closer to our times before the Holocaust as Hitler was rising to power in the early 1930's a group of German Jews traitors to their fellow Jews called the Naumann Party arose that openly supported Hitler's plans to Kill the Ostyuden (Eastern Jews) just like you support the PLO aim of murdering Israeli Jews. Of course once the Holocaust came Naumann and his small collection of Jewish traitors ended up in the "ash can" of history and got a free trip on the cattle car. Surely, the Moslem extremist will show their similar "gratitude" to you and all the other "Enemies of Zion" in the not so distant future. Maybe, when you see the Jews in America under serious violent attack in the future if, G-D forbid, the Nazis or KKK types ever come to power, you will be amongst those who will swim to Israel to save their lives. It will still be around in spite of your desire to destroy it.

*Note: The reason this article is called Round II is simply in the 1920's Jabotinsky wrote an article attacking left wing anti-zionists, Socialists and Communists who much like JATO and others today fought against creating a Jewish State. The title of his powerful article addressing these self-hating opponents of creating Israel was "To The Enemies of Zion"