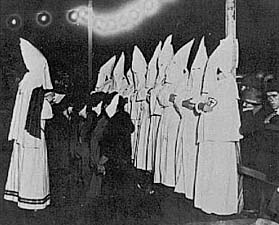 The New York based Jewish Defense Organization has continued its campaign to punish the KKK for trying to set up a chapter in New York, and by attempting to rally here. The JDO is now putting the name and home addresses of KKK members and leaders on both its website and phone hotline, to drive them out of the state.

The current Klansman on the site and hotline (212-252-3383)is Grand Lizard of NY James Sheeley, who lives in Walden. The JDO gives out his secret address and unlisted telephone number. The JDO in the past did this to the previous KKK head in NY William Hoff, costing him his job, and getting him evicted from his home. Now, the JDO intends to do the same again. "We will get KKK members evicted from their home and fired from their jobs, G-D speed" said JDO National Director Mordechai Levy.

"We are warning everyone that employs a Klansman, fire him or face the consequences" said David Weiss JDO spokesman. The potential consequences are a boycott, and spreading message especially using the internet about a company having a Klansman onthe payroll.