RON KUBY: WANTS THESE PEOPLE DEAD BECAUSE THEY ARE WHITE!! 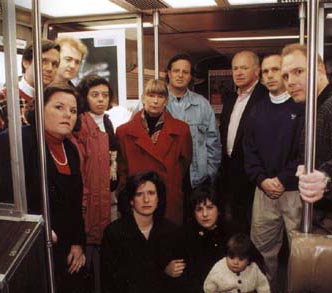 On December 7, 1993, Colin Ferguson marched up the aisle of a crowded, evening rush-hour Long Island Railroad car, shooting the passengers asthe train pulled into the Merillion Avenue station. When he was finished,six were dead and 19 were injured. In the end, Ferguson was sentenced to six consecutive life sentences - about 200 years of prison time - but before it concluded, the case raised serious questions about insanity and thelaw.

Noted criminal defense specialists William M. Kunstler and Ronald L.Kuby took Ferguson's case. They attempted to introduce a "black rage" defense on Ferguson's behalf. They argued that years of living in an oppressive, race-biased society had so affected Ferguson's mind that he was not acting wilfully when he opened fire on unarmed commuters. Ferguson disagreed with their strategy, and dismissed them. He wanted to argue, against dozens of eyewitnesses and police reports, that he was framed for the shooting, and that someone else committed the murders.

Ferguson chose to defend himself. Kunstler and Kuby opposed his decision,and had the court make a preliminary determination of his psychologicalcompetency to stand trial; in effect, they asked the court to determinewhether or not he was sane enough to be making such a fundamental decisionabout his own defense. The court determined Ferguson was indeed competent,and the trial proceeded. Kuby sat in as an assistant, but Ferguson directedhis own defense.

What ensued convinced many people that Ferguson was, indeed, insane.His defense theory was that he was set up and that he did not commit the

murders. On cross-examination of witnesses, some of whom had been woundedin the attack, he engaged in long, rambling narratives and accused police of conspiring against him. On February 17, 1993, a jury found him guilty of the murders.

The next day, Kuby and Kunstler withdrew from the case, and again asked the court to find Ferguson unfit to stand trial. One example of his insanity,Kuby opined, was his refusal to utilize the insanity defense. "Colin Ferguson has never permitted any lawyer to stand up in court and argue his insanity,"Kuby observed, adding, "He's too crazy."

During the sentencing hearing, Ferguson reiterated his entire defense theory. In a three-hour summation, he compared himself to the Christian New Testament's John the Baptist, and claimed history would prove him right. Judge Donald E. Belfi of the Nassau County Court strongly disagreed. He called Ferguson "selfish," "self-righteous," and "a coward." Noting Ferguson's "total lack of remorse," Belfi sentenced him to six consecutive life sentences.

Kuby and other observers insisted Ferguson should not have been allowed to defend himself. His conduct of the trial and his decision not to usethe highly plausible plea, "not guilty by reason of insanity," demonstrated his lack of fitness for trial, they claimed. Even if he had been committed to state psychiatric institutions for the rest of his life, many believed, the justice system would have been spared the mockery of its system byan obviously insane man.

RADICAL lawyer Ron Kuby has been fired as judge of a matzohball-eating contest. Ronnie Dragoon, owner of Ben's Kosher Deli, saidhe cancelled Kuby's scheduled Jan. 22 appearance after receiving nearly20 angry phone calls about the William Kunstler sidekick who attributedmurderer Colin Ferguson's shooting spree four years ago on the LongIsland Railroad to "black rage." Dragoon said several callers claimed tohave received an Internet or e-mail message to call a certain number fora recording about Kuby. The recording by "a militant Jewish defenseorganization" urgers callers to "give Ben's a taste of the anger of Jews.""It's been a terrible day for me," Dragoon said after reluctantly canningKuby as a judge. Kuby was in court and couldn't be reached forcomment.

Attention JDO Members: You can stop calling Ben's Kosher Open on the Shabbat "Kosher" deli as they have relented and are not going have that spaced out sickess, Ronald Kuby,as a judge. Kuby's psychological profile reveals that he is spending his life rebeling agains this father who was a Jewish Nationalist. William Kunstler became his surrogate father. If you do not like your father, you do not like your father, but don't make a career out of it! How can Ron Kuby, who claims to be ahippy, defend Moslem Fundementalcases, when, if they were in power in the United States, would lock him up his wife for not wearing a veil or lock him up for reading or publishing a satirical novel. Doesn't he realize that even though the United States might not be that good, there are far worse governments in the world? Kuby's mentor, William Kunstler, acted like an agent of the Soviet Union. When the Soviets said there was no conspiracy in the Kennedy Assassination, Kunstler defended Jack Ruby and expressed the opinion that there was no conspiracy. When the Soviet Union, via Tass, stated that there was a conspiracy in the death of William Sullivan of the FBI, Kunstler parroted that line. When Mr. Levy, asked Yippie Abbie Hoffman to attend a demonstration for Soviet Jews, who were then oppressed under Communism. Hoffman agreed to go. ThenAbbie unfortunately askedKunstler if he should go. Kunstler told him "Never demonstrate against aSocialist state." Kunstler was rumored to have become a Muslim. Not true.He also lived a hippy lifestyle and would have been executed or imprisonedif America ever became a theocratic Muslim state. The only words for these two characters are "self destructive" and "self hating." They defended the Muslin terrorist World Trade Center bombers, called them heros, and Kunstler said on the Barry Grey radio show that the World Trade Center was a legitimate target.

Maybe you thought the worst thing you could get from eating matzoh balls was heartburn. But recently, Ronnie Dragoon, owner of Jericho-based Ben's Kosher Delicatessen, learned they can also give you heartache.

A few months ago, Dragoon and the sales staff of WABC-AM radiocooked up a way to raise money for two charities that serve the homeless, creating the First Annual Charity Matzoh Ball-Eating Contest. Television and radio stars would be invited to participate - eating matzoh balls or counting how many others ate.

And that's where Dragoon's tsuris began - when he invited radio show host and attorney Ron Kuby, who, with the legendary William Kunstler, defended Sheik Omar Abdel-Rahman, convicted in connection with the World Trade Center bombing, and Colin Ferguson, the Long IslandRail Road murderer.

First, the Jewish Defense Organization called for a boycott of allBen's Delicatessen locations.

"These are the kind of boot-licking Jewish traitors that are selling us out," the message on the Jewish Defense Organization's hotline said earlier this week. "Yes. Ben's Kosher Deli. Let's give them a taste of the anger of the Jews in Brooklyn, Queens and Long Island, who are sickof the Kunstlers and the Kubys."

Then, Dragoon said, he began receiving threatening telephone calls, about two weeks before the finals slated for Jan. 22 at the Manhattan store.

"A man purporting to be a rabbi called and started screaming and yelling at me. Someone else who said they were from the PBA [Patrolmen's Benevolent Association] called and asked me how I could have the defender of a cop killer take part. This went on for a week," said Dragoon. "I was concerned that on Jan. 22 that someone would commit violence. I could personally live with that, but I'm not sure I shouldbe the one to put others at risk."

So Dragoon withdrew his invitation to Kuby to judge the matzohball-eating contest. Over a bowl of matzoh ball soup in Ben's in Manhattan, Kuby agreed.

"Only in New York City are matzoh balls a matter of racial,political and religious debate," Kuby said. "I would have been a good judge. My grandmother made matzoh balls until she entered a nursing home when she was in her 90s. It's one area I actually have a great deal of expertise. And this was as close to a real judicial appointment as I was ever likely to get."

Mordechai Levy, founder of the Jewish Defense Organization, has his sights on Kuby."Kuby is Kunstler's living successor," Levy said in a telephone interview. And "we have the right to destroy him. We did the same thing to the Ku Klux Klan, and we'll do the same thing to someone who supports Arab terrorists. We're going to drive him into misery, just like we did Kunstler."

The day after Dragoon made his decision to ask Kuby to bow out, he was not pleased with himself. "I'm giving credibility to people who are using the same strong-arm tactics and terrorism, just what they're accusing Ron Kuby of," Dragoonsaid. "Freedom of speech is being repressed and the people around Ben's are being put at risk."

Levy said he would call off the boycott of Ben's restaurants once he had confirmation that Kuby was no longer a judge. But pressure is now mounting to drop Curtis Sliwa, Kuby's partner on a WABC radio program. Sliwa, the founder of the Guardian Angels, is slated to be a guest matzoh ball eater Jan. 22. Dragoon said someone claiming to be from the Puerto Rican Defense League threatened to organize a boycott if Sliwa participated. Sliwa angered many Puerto Ricans in 1992 when he said they carried switchblades for fighting because it was in their blood.

Angelo Falcon, director of the Institute for Puerto Rican policy, said he knew of no one on staff of its sister organization, the Puerto Rican Legal Defense and Education Fund, who made the call. Sliwa did notreturn calls for comment. Calls or not, Dragoon is standing by Sliwa. "I'm leaving Sliwa inplace no matter what," said Dragoon.

"I always kept politics out of the store," said Dragoon. "It had noplace. I don't know how people can make a political issue out of tryingto feed the homeless with private-sector dollars."