Time to Save Pollard - Not Rosenberg!

Often JDO members forward various articles, flyers, and letters from various outfits fighting for everyone but Jews, to National Headquarters. The reason is so we can evaluate the material, or get a good laugh. Much of these foolish causes, un-Jewish and often supporting all manner of Jews who fight for every cause but a Jewish one get put in the " Jews for Nothing" file. Sometimes, its about Jews fighting to save the whales, or furs, sometimes its about Jews marching for the environment. Sometimes its a collection of Jews marching against Israel, or against the war against terror now in Iraq while burning the Israeli flag. All in all its about Jews marching for nothing, nothing for helping their own fellow Jews that is. Recently, JDO was forwarded a screed from the " National Committee to Reopen the Rosenberg Case", that is Julius & Ethel that is. These 2 were convicted of having given atomic secrets to the Soviet Union, as members of the Communist Party in the US. Now, they were executed June 19,1953 the screed mentions over 50 years ago.

Take note, those who wrote and endorsed this worthless campaign are not trying to save anyones life, as both the Rosenbergs are dead. They are trying to rehabilitate their reputation. Now, I take a look at the director of the campaigns signature, Aaron Katz, Jewish you could presume. Havent seen him organizing a full time office, petitions, or meetings to save a living Jew, lover of Israel truly worth saving named Jonathan Pollard. Now, I take a look at the endorsers, the sponsors of this foolishness. Rabbis with names like Paul Kushner, Richard Levy, as well as all kinds of Jews with names like Zinn, Kinoy, and a slew of others to lengthy to name. However, every proud Jews should demand that these hypocrites feel the pain of Jonathan Pollard a fellow Jew who risked his life to give Israel info on the Iraqi nuclear and chemical weapons program, which Saddam the Arab Hitler pledged would be used to finish the Jews off, crematorium style. These men on that list filled with self-hate as Jews, could not care less about a living hero of Israel and the Jewish People, named Jonathan Pollard. That is why they havent signed one petition for the Prisoner of Zion. Jews must form a" National Committee to Free Pollard ", and launch rallies, meetings, petitions, and go to each of the endorsers of that screed of nonsense (for the Rosenbergs) and demand they sign on for Pollard. We must and will publicize those who do sign it, and those who dont!

These are the same people that 4 years ago while that "bastion of human rights" the Islamic Republic in Iran arrested Jews for daring to print a Hebrew prayer book and were threatened with death sentences for that did not utter a peep. Even as JDO held prayer vigils and protests, demanding freedom for the "Iran 13", we never once saw the Kinoys, David Dellingers, or Leonard Weinglass or their hypocritical ilk.

Recently, when a Hitler emulator who runs Iran threatened every Jewish man, woman, and child with a (Heaven Forbid) promised Holocaust of Islamic nukes against Israel, the Jewish State, the same crowd was of "Jews for Nothing" was noticeably invisible. Why?

Did they suddenly lose their ability to demonstrate or something? Over the years, we have had many speeches JDO, and always would point out those Jews who did more for lettuce pickers, than wanting to fight anti-Semitism, or attacks on Israel. There are Jews that will march for every cause but a Jewish one." During the Holocaust 6 Million Jews were getting murdered it was precisely that crowd, even Jews, that was invisible while bellowing Keep Quiet and dont make Hitler a Jewish issue."

POLLARD CAUGHT GIVING INFORMATION TO ISRAEL YEARS AGO: A SO CALLED SPY FOR ISRAEL THAT GAVE INFO ON SADDAM HUSSEIN'S PLOTS TO TRY AND USE NUKES (Heaven Forbid) or chemical weapons on Israel that the US Government had found out about. Pollard, then working for the US Navy, passed the info to Israel to help protect it! Pollard for this act of heroism, has been sitting 18 years in prison. Why? He did not spy for an enemy country, but gave the info to Israel, an ally of the US. Meanwhile the Jewish Establishment groups lie the Jewish Council for Public Affairs, has been sitting on its hands. It would rather spend its time forming subcommittees to study how to save the environment, the whales, and the trees. (they are super liberal) What about saving the Jews? Specifically Pollard?

CALL HANAH ROSENTHAL OF THE JEWISH COUNCIL FOR PUBLIC AFFAIRS 212-684- 6950 EXTENSION 208. DEMAND ACTION AT THEIR UPCOMING CONVENTION TO FREE POLLARD !!!!

ALSO DEMAND THAT JCPA DEAL WITH THE NEED FOR DEFENSE TEAMS TO PROTECT SYNAGOGUES AND JEWS !!!(WHAT JDO HAS DONE FOR YEARS !!)

The JDO has a major campaign to Free Jonathan Pollard. There are now many trying to free him. Remember he put his very life on the line for Israel, but in reality gave info to Israel that would help Israel fight those ARAB TERRORISTS that are a threat to Israel and America. Over the weekend a major Arab terrorist was caught smuggling explosives from Canada. 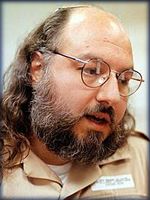 He was without a doubt going to target Jewish targets and run of the mill American targets. (Just like the World Trade Center bombing). Now, it was Pollard that gave Israel information about terrorists exactly like this one! Israel at the time had a policy of liquidating such terrorists before they could strike. Now, clearly Pollard CAN AND MUST BE FREED! Now some of the activists have put pressure publicly on Clinton and his wife to free him.That must be stepped up. Jews (and sympathetic non-Jews) should write President Clinton and call White House to demand freedom for Pollard. But the JDO Campaign to Free Jonathan Pollard involves protests and pressure on the Jewish Establishment who have "Clinton's ear". CALL THE FOLLOWING AND DEMAND THEY DO EVERYTHING THEY CAN TO DEMAND THE PRES FREE POLLARD IMMEDIATELY! CALL DAVID HARRIS OF THE AMERICAN JEWISH COMMITTEE (212)-751-4001

CALL PHIL BAUM of the AMERICAN JEWISH CONGRESS at (212-879-4500, and call Mr Foxman of the ADL at (212)-490-2525 and tell all your friends to call daily and repeatedly! Pollard's life depends on it!!!! Ask your Rabbi and synagogue to do the same! Remember: Most spies never serve out their full sentences because the government they were spying for eventually comes to their aid. Pollard should be no different but he is because he was a Jew and he was spying on America. Not only should Pollard be freed, but the Israelis should name the spy satellite that replaced him "The John Pollard"!!